Ben 10 and his alien companions are going against the US army in Ben 10 Big Battle! You start out as the wolf-like alien from the Ben 10 TV series but later you can change into other characters and each one of them has their own powers that will help you defeat the enemies. Attacking repeatedly will create combos, and hitting the enemies will fill up a meter under your health gauge. When the meter is filled, you can unleash a special attack that is different depending on the alien that you are playing as at the moment. Destroy crates for bonus weapons. Ben 10 Big Battle is one of our many Fighting Games that we publish on TheGamerStop.com. This game is also tagged as a Ben 10 game. Click the play button to start having fun. To play even more free games, view our popular and new games page. If you want to play more games like this, then you can simply check out the games inside the game tags that are the most relevant to your interests or the Fighting Games category or the games like this game page at the end of the game tags.

Ben 10: The Return of Psyphon 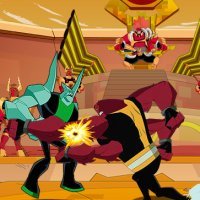