Unfairy Tales is a flash game that will tell about slumber and dreams, and the character that you will be controlling is a man who was just enjoying his Halloween when the most unexpected event happened. Three boys were trick or treating until they came to the last house, and it was creepy because the owner is. After gaining the courage, Alan, one of the trick or treaters, rang the doorbell, but instead of an answer, he was sucked into a vortex that took him into a castle. He stumbled upon a guard who told him that the king was already waiting for him. Unfairy Tales is one of our many Adventure Games that we publish on TheGamerStop.com. This game is also tagged as a RPG game. Click the play button to start having fun. To play even more free games, view our popular and new games page. If you want to play more games like this, then you can simply check out the games inside the game tags that are the most relevant to your interests or the Adventure Games category or the games like this game page at the end of the game tags. 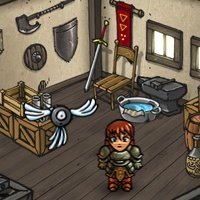